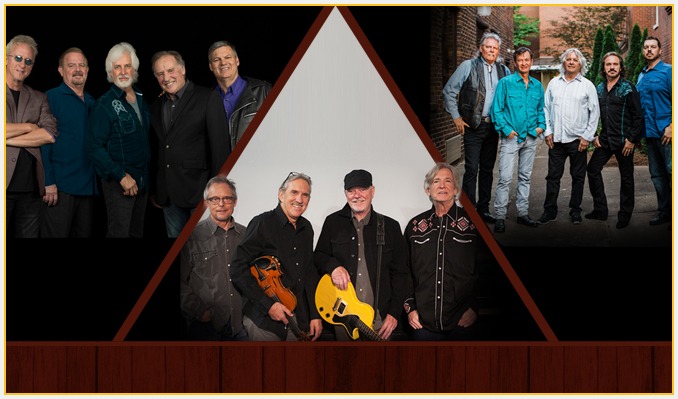 For more than 50 years, their distinctive harmonies and stellar musicianship helped define the sound of country-rock. Still led by the band co-founder and multi-instrumentalist who wrote and sang their biggest hits, they are a dedicated unit of four formidable songwriters, vocalists, arrangers and players. And rather than rest on any of these considerable laurels, they instead hit stages coast-to-coast armed with the kind of classic songs and instrumental chops that puts performers half their age to shame.

In other words, Poco today is a band reborn.

“Poco has a history unmatched by any band,” says co-founder Rusty Young. “We’ve always been formed by individually unique artists. It’s fate that the four of us came together, and it’s a process of evolution that we’ve become a better and better band.” Poco is Young (steel and acoustic guitars, dobro, mandolin, banjo, vocals), Jack Sundrud (bass, vocals), Michael Webb (keyboards, mandolin, accordion, guitars, vocals) and Rick Lonow (drums, vocals). “We’re so in tune with each other musically and personally,” Young says, “that I consider us to be one of the very best bands that Poco has ever had.”

The quick history: Rising from the ashes of Buffalo Springfield, Poco was founded in 1967 by Rusty Young, Richie Furay, George Grantham and Jim Messina. Over the next five decades, alongside band mates that would also include Paul Cotton, Randy Meisner and Timothy B. Schmit, Rusty became not only the musical core of the band, but also the writer and vocalist behind hits including ‘Rose Of Cimarron’ and the #1 smash “Crazy Love’. “I made a promise to myself that Poco would only keep going if we remained a band of real musicians who were having fun,” Rusty says. “Because audiences can tell the difference.”

“We all feel like we’ve landed on a combination of people and a situation that gives us a lot of satisfaction,” agrees longtime bassist Sundrud, whose pre-Poco stints included bass/vocals for Dickey Betts, Nicolette Larson, Vince Gill and Bobby Whitlock, songwriter for Kenny Rogers, Ty Herndon and The Judds, and co-founder of the celebrated progressive country band Great Plains. ““Poco has always blazed a trail musically,” he says. “The band was on the forefront of getting country and rock to work together organically. I’m proud to be part of Poco, and today we’re all focused on keeping Poco vibrant and new.”

“At the end of the day, bands survive and flourish on their chemistry,” says Lonow, who was a former member of The Flying Burrito Brothers, The Jamie Hartford Band, The Bellamy Brothers and Burrito Deluxe, played on Grammy nominated/winning albums by June Carter Cash, Billy Joe Shaver and Loretta Lynn, and was co-writer of Poco’s 1989 smash ‘Call It Love’. “Rusty is still the voice that everyone recognizes from the hits and he can still play his ass off. Jack has been in the band since 1985 and his vocals and bass playing are key to the Poco sound. Michael brings a musicianship that has redefined the band’s energy. When we want, we can turn any song into a really amazing country-rock odyssey.”

“All of us had individually been a part of some very musically adventurous scenes, whether it was country, rock or bluegrass,” explains Michael Webb. “And Poco pretty much created a lot of the templates that influenced what we were all doing.” Kentucky native Webb had begun his career working with The Wooten Brothers before moving to Nashville in the late ‘80s and joining cult country-rockers Mark Germino & The Sluggers and The Brooklyn Cowboys, as well as playing on and/or producing albums by Chris Stapleton, Allison Moorer, Dan Baird and Stacey Earle. “Poco was exactly what I was looking to do and didn’t even know it,” Webb says. “At the time I got the call, I was on tour with John Fogerty who’s known for playing his songs exactly as people remember them. Poco puts the songs first, but are also committed to being sonically creative. Rusty and I started pushing each other in solos and improvisation almost instantly.”

For the band’s legion of longtime fans – known as ‘Poconuts’ – as well as new converts, it’s Poco’s live performances where their newfound attitude and energy truly goes next level. “We challenge each other every time we’re onstage,” says Rusty, “which means that no two shows are ever alike. Between Michael and I, we play 10 different instruments and are able to open up some musically adventurous journeys.” Webb is proud that audiences have enthusiastically embraced the band’s new approach. “We still play all the hits that fans love – and we love playing them – but our emphasis is no longer on duplicating the catalog,” he says. “Rusty is a great writer and singer, but he’s first and foremost a really imaginative musician. And his musicianship is becoming a focus again.” Alongside hits like ‘Crazy Love’, ‘A Good Feelin’ To Know’, ‘Rose Of Cimarron’, ‘Call It Love’, ‘Heart Of The Night’ and ‘Keep On Tryin’’, songs from the acclaimed 2013 album All Fired Up are now concert favorites. Best of all, the band’s incendiary instrumental jams have become an organic throwback to Poco’s legendary ‘70s performances. ”There are a lot of people seeing the band for the first time, or for the first time in 10 years,” says Sundrud. “And they tell us that Poco is just a great rock & roll experience.”

Yet another bonus of the band’s rebirth is the growing recognition of Poco as godfathers of the roots movement. “Poco, at its core, is an early example of what could be described as Americana” No Depression said in 2014; “a roots rock band that melded genres in the process of creating something new and exciting.” Rusty – arguably the most influential steel player in rock & roll history – was inducted into Guitar Player Magazine’s ‘Gallery Of Greats’ in 2012, and Michael, Jack and Rick are in-demand session players for artists that include Sturgill Simpson, Chris Knight, Ryan Bingham, Jamey Johnson and Zac Brown Band. “Artists like Buffalo Springfield, Gram Parsons, The Band and Poco wrote the blueprints for the Americana movement,” Lonow says.

“They were a bunch of longhaired hippie rockers who couldn’t deny their love of steel guitar and harmonies. Americana began as folk and country-rock, and Americana fans tend to also be Poco fans.”

“We don’t feel like a 50-year old band,” Rusty Young says with pride. “Poco has never slowed down or stopped making new music. Everyone loves the challenge of being in Poco, and we’re all working hard at moving the band towards new audiences. We love playing for people who haven’t heard Poco in a while – or are maybe hearing them for the first time – and having them discover who Poco is today.”

For Poco, this is more than just a time of rebirth. On record and onstage, it’s the sound of a legendary band once again hitting its stride.

Orleans is best known as the 70s Pop/Rock band that brought you the iconic hits “Still the One”, “Dance With Me” and “Love Takes Time”. Now entering it’s 41st year of live performances, Orleans has produced a body of work spanning 16 albums and several DVDs. The band continues to be in great demand domestically and internationally for live shows, as they have been for four decades.

In the summer of 2012, Orleans experienced a tragedy in the sudden passing of cofounder Larry Hoppen. While there is no replacing Larry, the decision was made to somehow continue to perform the remaining shows of the year’s calendar. Cofounder/brother Lance Hoppen, along with long-standing members Lane Hoppen, Fly Amero and Charlie Morgan were rejoined by co-founder John Hall (who had been on sabbatical as a US Congressman) in order to finish with dignity and integrity what had been started 40 years prior.

With more than a dozen successful shows under their belt, the band finds that they are more than ready, willing and able to forge ahead into year 41.

From their beginnings in mid-Sixties Ohio as a group of friends playing cover tunes to the present-day unit featuring founding member/pedal-steel innovator John David Call, veteran bassist Mike Reilly, propulsive drummer Scott Thompson and guitar ace Donnie Clark, PURE PRAIRIE LEAGUE continues to embellish the rich 43-year history of one of Country-Rock’s pioneering forces. As one reviewer recently wrote: “PPL’s sound combines sweet memories with edgy, contemporary muscle. Their vocals are as strong as Kentucky moonshine and the musicianship and performance skills are as sharp as a straight razor”.

Their eponymous first album – featuring the Norman Rockwell/Saturday Evening Post cover that introduced fans to PPL’s trademark cowpoke “Sad Luke” – has been hailed as a “major early influence in the emerging popularity of Country-Rock music”. Their second effort, the multi- platinum “Bustin’ Out” brought us the Craig Fuller-penned classic “Amie”, along with other gems of the genre. With “Two Lane Highway”, nine more albums and countless shows, a legacy has been forged and enriched during the

Now in their fifth decade, Pure Prairie League continues to lead the way for the new generation of Country/Rockers such as Keith Urban, Nickel Creek, Wilco, Counting Crows and so many others that cite PPL as a major influence.

As crisp and clean as spring water and as comfortable as a well-worn cowboy shirt, Pure Prairie League still brings it all back home.

Official WebsiteAmazon
*Service and handling fees are added to the price of each ticket.