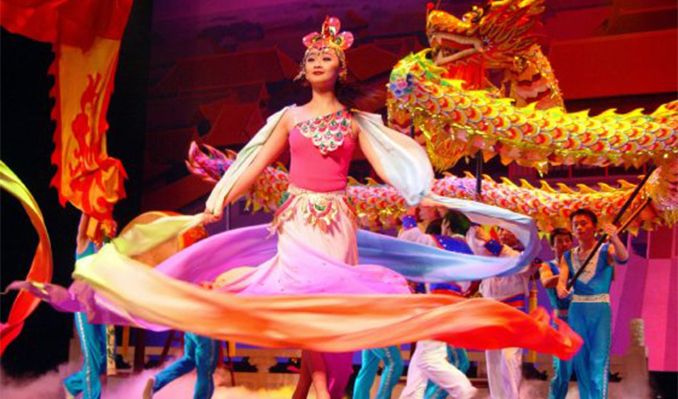 Astonishing athletes defy gravity and execute breathtaking feats as they stretch the limits of human ability in this spellbinding show.  Fearless performers with boundless energy bring you more than two thousand years of Chinese circus traditions.  If it's humanly possible-and even if it's not! -Shanghai's acrobats, jugglers and contortionists do it with spectacular flair.

The Incredible Acrobats of China are simply that - incredible! This talented troupe, just off a sold out highly acclaimed Broadway tour continues to WOW audiences of all ages.

The show is a beautifully orchestrated presentation of Chinese circus acts dating back to harvest festivals of 2000 years ago. This modern day performance is enhanced by fabulous choreography, amazing lighting, enchanting scenery, and powerful music.

Audience members are enthralled by astounding contortionists, masterful acrobatsand clever comedians. They see feats of incredible skill and imagination. They gasp at many of the gravity-defying feats and applaud at the super-human displays of power and extraordinary grace.

In acts that often trace their origin to the harvest festivals of more than 2,000 years ago, this youthful, handsome and graceful company spends a  swift two hours in a range of demanding performances, most of them typifying Chinese circus and constituting a refreshing alternative to the Western tradition.  Under the direction of Zhao Lizhi, the artistry, individually and collectively,attains levels that make it seem almost unfair to single out any act, from jugglers to the comic knife throwers and the bicyclist who finishes by piling about 10 of his colleagues aboard his vehicle.

Fans of circus of any sort are bound to appreciate the young women spinning six plates at a time atop sticks, while one of their number goes through amazing contortions without ever dropping a dish.  And what about the woman who stacks chair atop chair on a fragile foundation of four vases atop a table, and makes her way acrobatically to the pinnacle of this rickety structure?  Or the young man who juggles a huge jar, usually using only his back or shoulders, and catching it on edge atop his head? Or the young man who builds an absolutely ungainly structure of more than 20 wooden benches and balances them on his head? What is the secret of the young woman who manages to lie horizontally with no apparent support but the point of a sword placed against the back of her neck?

And let no one overlook an act called the nose balance, on which a young woman balances a glass of water on her nose, covers it

Confronted by feats like this, onlookers can catch their breath while witnessing a very funny knife-throwing act and soothing eye and ear with the consistently artful costumes, atmospheric lighting and music."  - The New York Times