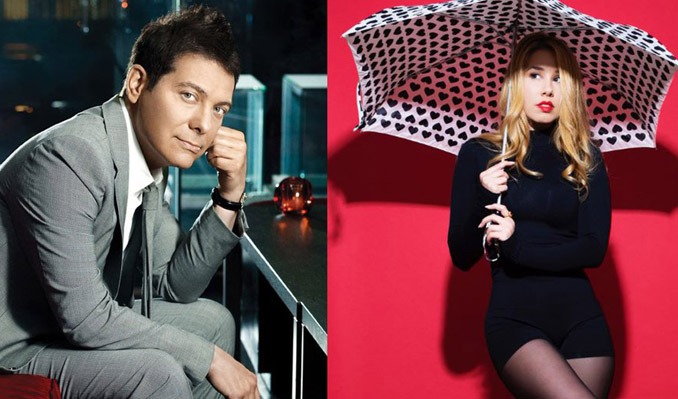 Michael Feinstein “You’ve Got A Friend” From Gershwin to Carole King and Beyond:

Featuring special guest Haley Reinhart  “You’ve Got a Friend” is a musical experience that crosses generations and musical boundaries by bringing together five-time Grammy nominee, Michael Feinstein, and American Idol alumni, Haley Reinhart. From Gershwin, to Carole King, and beyond, these two powerhouse entertainers expand the Great American Songbook into the modern era showcasing songs from all different eras and genres where the Great American Songbook left off.

By combining both of their natural musical sensibilities they create a unique experience that is fun yet musically rich. “You’ve Got A Friend” pays tribute to a wide range of artists such as: Frank Sinatra, James Taylor, Chicago, Stevie Wonder, Carole King and many others to create an evening of music that you don’t want to miss.

Michael Feinstein, the multi-platinum-selling, five-time Grammy-nominated entertainer dubbed “The Ambassador of the Great American Songbook,” is considered one of the premier interpreters of American standards. His 200-plus shows a year have included performances at Carnegie Hall, Sydney Opera House and the Hollywood Bowl as well as the White House and Buckingham Palace.

More than simply a performer, Feinstein has received national recognition for his commitment to celebrating America’s popular song and preserving its legacy for the next generation. In 2007, he founded the Michael Feinstein Great American Songbook Initiative, dedicated to celebrating the art form and preserving it through educational programs, Master Classes, and the annual High School Vocal Academy and Competition, which awards scholarships and prizes to students across the country.

Feinstein earned his fifth Grammy Award nomination in 2009 for The Sinatra Project, his Concord Records CD celebrating the music of “Ol’ Blue Eyes.” A new PBS concert special, The Sinatra Legacy, is currently airing across the country; The Sinatra Project, Volume II: The Good Life, its companion CD, was released on October 25.

The award winning PBS series, Michael Feinstein’s American Songbook – in which he uncovers treasures of classic American music – is now available on DVD, with an additional disc of bonus features.
Feinstein serves as Artistic Director of the Center for the Performing Arts, a $170 million, three-theatre venue in Carmel, Indiana, which opened in January 2011. The Center is home to an annual international arts festival, diverse live programming, and the Michael Feinstein Great American Songbook Initiative Archive and Museum displaying rare memorabilia and manuscripts. Starting in 2010, he serves as the director of the Jazz and Popular Song Series at New York’s Jazz at Lincoln Center.

More InfoTwitterOfficial WebsiteFacebook
*Service and handling fees are added to the price of each ticket.