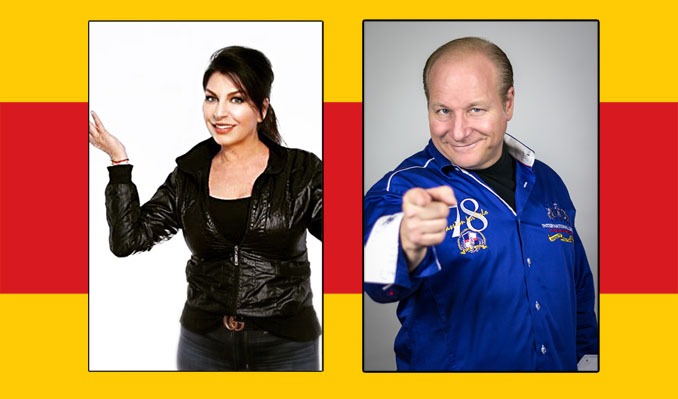 Mike Marino – affectionately known to thousands of his fans as New Jersey’s Bad Boy – is one of the most unique comics of our time. He has performed in every major comedy club from New York to Los Angeles including: The MGM Grand, Catch a Rising Star, The Comic Strip, Stand Up NY, The Improv, Rascals and The Icehouse. Mike, who has worked with some of the biggest names in the business, can be seen nightly as a top headliner at both the world famous Laugh Factory and The Comedy Store in Hollywood.

Mike was born in Jersey City, New Jersey. He entered the world of theatre at an early age, and is a graduate of the prestigious American Academy of Dramatic Arts. Mike has appeared in over 200 national television commercials, and has received a Best Actor Clio Award Nomination.

After great success in film, theatre, commercials and soaps, Mike began touring the country performing at countless comedy clubs and sold out theatres in the thousands. His stand-up material ranges from cutting edge observations of everyday life to his Italian family roots; which recently spun into a T.V. pilot called “Marino’s”.

In the Fall of 2008, Mike was inducted into the New Jersey Comedy Hall of Fame. Mike has also been featured on numerous talk shows and has hosted some of the most prestigious award shows including The Beverly Hills Film Awards, Hoboken Film Festival, and the Montreal Quintus Film Festival.

Mike has a tongue like a razor and a heart of gold. He has the incredible ability to perform in any arena, big or small, and can cater his material for all audiences, from strictly clean to down and dirty.

Tammy Pescatelli - Arguably one of the hardest working women in comedy today, Tammy Pescatelli brings brassy sexiness with a bold voice of witty sarcasm to her audiences, holding her own on the topics of sports, television, dating and family life using tongue-in-cheek humor. She is relatable to every audience member-male & female. After seeing Tammy perform, nearly everyone wishes she was their best friend or sister!

Tammy Pescatelli’s “Way After School Special (2020), was a highly anticipated follow up to Tammy’s award winning one hour Netflix special, “Finding the Funny.”Also in 2020 Tammy appeared on the highly acclaimed Showtime Comedy Special, “Women Of A Certain Age 2”.

A popular clip from Tammy’s appearance on the “Just For Laugh’s Gala with Sebastian Maniscalco”, continues to rack up views on the JFL Facebook and Youtube pages garnering close to 50 million views!Signed to Git R’ Done Records, Larry the Cable Guy’s label, Tammy took funny back in time with her successful 2019 album release, “#TBT: THROWBACK TAMMY” which debuted at number 2 on iTunes and is in continuous play on SiriusXM and Pandora.

Tammy has recently appeared on The View, Guy’s Grocery Games:Comics Compete and The Howard Stern Show.  She was chosen by Jenny McCarthy & Donnie Wahlberg to be a part of their Dirty, Sexy, Funny franchise that includes a hilarious all-female slate of standup comedians with a comedy special on EPIX/ Hulu, a touring show and a pilot for A&E.

With a slew of other accolades under her belt – including co-creating, executive producing, writing and starring in her own reality show, A Stand-Up Mother, on the WeTV Network – Tammy has appeared on numerous television shows including The Tonight Show with Jay Leno (4x), A&E's Donnie Loves Jenny (2x), Bravo’s Rocco’s Dinner Party, CBS’s The Talk, NBC’s Last Comic Standing: The Best of the Best, her own Comedy Central Presents Special which won the Comedy Central Standup Showdown, and many, many more.

Tammy’s career jumpstarted after appearing - and being one of the Final 5 - on NBC’s Last Comic Standing. Her season played out to more than 18 million viewers, garnering her a mass of loyal new fans that found themselves alongside the others she had created by years of touring the comedy clubs. It solidified her as one of the sharpest comics in the comedy world!

Pescatelli also guested a number of times on the syndicated Comics Unleashed show and was chosen for their “Best of the Best” that was a world-wide top selling DVD. Internationally she was also featured on the Best of the Just For Laughs, in Montreal, Quebec Canada and The World Stands Up & The Laugh Factory in Europe and Australia.

Tammy’s material is a fixture on the comedy channels of Sirius XM Radio and she is a regular guest of: The Howard Stern Wrap Up Show, Jenny McCarthy’s “Dirty, Sexy, Funny” (where she often co-hosts), TapOut and Bennington. She also makes frequent appearances on the syndicated The Bob & Tom Show.

Tammy recently starred as the flawed, yet lovable lead in in “That’s Amore”- an independent “grown up rom-com” that will be released Feb 14, 2020. Her film credits include: Made in Brooklyn, I Am Battle Comic, Single: A Documentary Film and Everybody Wants to Be Italian. She was recently chosen to be a host on Circle TV’s standup show called “Standup Nashville: Live From Zanies”.

Also a regular on USO Comedy tours, Tammy is honored and humbled to have been privileged to have entertained our troops all over the world.

She currently continues to tour and sell-out shows around the country.

Official WebsiteFacebook
*Service and handling fees are added to the price of each ticket.