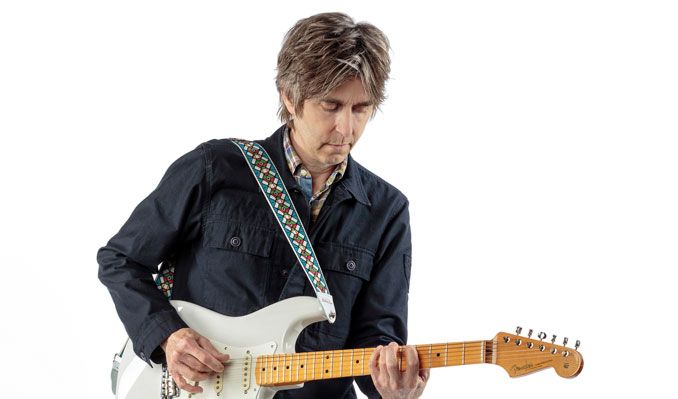 The guitar has been very good to Eric Johnson, earning him international renown as a player, composer, recording artist and live entertainer as well as an ever-growing audience of admirers. And Eric Johnson has been very good to the guitar, spotlighting its myriad melodic, sonic and lyrical splendors, paying homage to its heroes and innovators, collaborating and playing with many of its finest contemporary talents, and fostering its continuing vibrancy as a primarily instrumental genre in popular music.

“He's an extraordinary guitar player accessible to ordinary music fans,” notes the Memphis Commercial Appeal. That’s because Eric Johnson plays music and not just the guitar. He is also a gifted player of the piano (his first instrument) as well as songwriter, singer and song interpreter. Or more succinctly, Eric Johnson is a diverse, versatile and fully realized musical creator who plays guitar like no one else.

The pivotal event in Johnson's rise to becoming, as Guitar Player says, “one of the most respected guitarists on the planet," was his million-selling, now-classic 1990 album Ah Via Musicom (which loosely translates as "communicating through music"). It was his second release, following Tones, his 1986 major label debut.

Musicom yielded three Top 10 singles – "Cliffs of Dover," which has become Johnson's signature song and won a Best Rock Instrumental Grammy, and "Trademark" and "Righteous." It made him the first artist to ever score three Top 10 instrumentals. Now, 28 years later, he revisits that landmark recording with a 2018 tour on which he will play the album – hailed as a "masterwork" in Amazon.com's review – in its entirety.

The Austin, Texas-based Johnson also closes out 2017 with a new album, Collage, that combines five new original songs with five covers that reflect both his inspirations and range: An acoustic version of Jimi Hendrix's "One Rainy Wish," The Beatles classic "We Can Work It Out" in a Caribbean groove, B.B. King's "Rock Me Baby," the surf rock classic "Pipeline" and Stevie Wonder's 1966 #3 pop hit "Uptight (Everything's Alright)."

The years prior to Ah Via Musicom and since are rich with accomplishments. Over the now five studio albums that have followed it – Venus Isle (1996), Bloom (2005), 2010's Up Close (and its revised European version Up Close – Another Look, now being issued in the US), EJ (2016) and the latest – Eric has broadened and enriched his rock guitar palette and further delved into his love for blues, jazz and country. He's earned six Grammy nominations, has topped or been listed high in countless greatest guitarist lists in music publications, and been featured on the cover of most every guitar magazine, many more than once.

Johnson released an album in 2014 with jazz guitarist Mike Stern, Eclectic, that also landed him on the cover of Downbeat. His catalog further includes a collection of outtakes, demos and live treats, Souvenir (2002). And in 1998 his never-before-issued very first album recording from some 20 years before, Seven Worlds, was finally released by its producer (All Music Guide hailed as a "classy false start to a great career").

As an ardent live performer who regularly tours, "Few rock guitarists can take an audience on an unforgettable journey like Eric Johnson can," observes Brave Words & Bloody Knuckles. His primary live performance configuration is as a trio, most often with some of Austin's top players, including drummer Tommy Taylor and bassist Kyle Brock, who toured with him following Ah Via Musicom's success and return for the 2018 outing. He's also done acoustic tours both solo and as a trio with noted players Peppino D'Agostino and Andy McKee, and electric guitar tours with his hero B.B. King and pal and peer Sonny Landreth.

His concert performances have been captured on a number of releases. Europe Live (2014) "serves as a fine introduction to this stunning musician," says All Music, as also do the his two Live From Austin TX CDs plus a DVD from his "Austin City Limits" performances and Anaheim Live (2008). Eric's side project Alien Love Child as well released an in-concert disc, Live and Beyond, in 2000. His 1996 tour with Steve Vai and Joe Satriani hit stores the following year as G3: Live in Concert.

Johnson is an avid admirer of fellow guitarists past and present, and has recorded and/or performed with such other notables as Chet Atkins, B.B. King, James Burton, Jerry Reed, Steve Miller, John McLaughlin, Jimmie Vaughan, Jeff "Skunk" Baxter, Dweezil Zappa, Adrian Legg, John Petrucci and others. He has paid homage in song to such players as Jerry Reed (“Tribute to Jerry Reed” on Bloom), fellow Texan Stevie Ray Vaughan (the Grammynominated track “SRV”) and Wes Montgomery (who Johnson saluted in his Ah Via Musicom song “East Wes”). He has to date appeared on eight Experience Hendrix tours paying homage to one of his seminal guitar icons.

Eric's artistic journey began in his teens in the Austin clubs, not long after joining the psychedelic rock band Mariani and later touring with the jazz-rock fusion group The Electromagnets. Eric's burgeoning reputation and touts from both Prince and Christopher Cross helped win him a deal with Reprise Records in the mid 1980s. The album that resulted, Tones, failed to chart. But it did earn him his first Grammy nomination for the song "Zap" and landed him on the front of Guitar Player magazine with the cutline: "Who is Eric Johnson & why is he on our cover?"

Once Ah Via Musicom hit, the Los Angeles Times noted how he had already "been compared with rock's immortals." But Eric himself modestly demurs. "I don't think I'm a rock god. I just keep playing. It's fun, and I'm glad people enjoy it."

Official WebsiteYouTubeTwitterFacebookMySpace
*Service and handling fees are added to the price of each ticket.