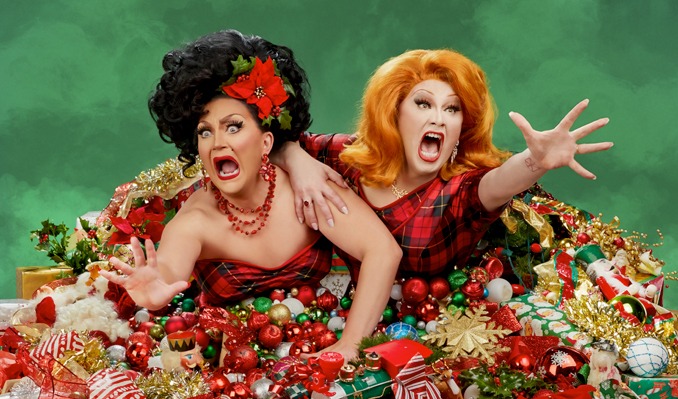 BenDeLaCreme and Jinkx Monsoon are taking the stage once again in a post-apocalypse-mas extravaganza certain to make this yuletide gayer than ever! That’s right… After a year of doom, gloom, and zoom, the Queens of Christmas have risen from the rubble to unearth your favorite holiday tradition. The wildly successful, internationally acclaimed Jinkx and DeLa Holiday Show is back with its signature whip-smart comedy, brand new songs, and a few perennial favorites. You better watch out, you better not cry, because Jinkx and DeLa are coming back to YOUR town… LIVE!! VIP Meet & Greet tickets include prime seating in front section, tickets to the show, and a post-show meet & greet with BenDeLaCreme & Jinkx Monsoon.

Sweet as pie and sharp as cheddar, the Terminally Delightful BenDeLaCreme is known for combining her background in performing and visual arts with a love of spectacle, glamour, and Saturday morning cartoons. She has dazzled crowds throughout the Americas, Europe, and Australia, premiered four critically acclaimed solo shows Off-Broadway, as well as written, directed, and produced myriad narrative works and variety spectaculars that have played to sold-out audiences for over a decade. BenDeLaCreme’s live performances have received glowing reviews: “Keeping you entertained while making you think about your place in the world is all a part of the BenDeLaCreme experience,” said Forbes and Billboard raves that her work “...soars past entertainment and into the realm of theatrical art.” BenDeLaCreme has appeared on two seasons of the Emmy Award-winning RuPaul’s Drag Race, her first go-round securing her a spot among the show’s “15 Fan Favorites of All Time.” After being crowned “Miss Congeniality” on Season 6, she returned to compete on the third season of RuPaul’s Drag Race All Stars on VH1 where she garnered more challenge wins than any other competitor in the show’s history, among other series records. Continuing to break new ground by, and for, drag artists, DeLa’s production company, BenDeLaCreme Presents, produced its first national tour with, To Jesus, Thanks for Everything! -Jinkx and DeLa, co-created and co-written by BenDeLaCreme and Jinkx Monsoon. In 2019, the queens hit the road again with a brand new holiday show titled, All I Want for Christmas is Attention. That tour was a sold-out sensation and marked DeLa’s first producer credit for an international tour. In 2020, BenDeLaCreme self-produced, directed and co-wrote her debut film under BenDeLaCreme Presents, "The Jinkx & DeLa Holiday Special" which became a critical and commercial success, leading to an exclusive licensing deal with Hulu. DeLa is thrilled to add producing and directing her first film feature to her long list of career achievements. BenDeLaCreme also made a cameo appearance along with Jinkx Monsoon in Hulu's biggest film debut to date, The Happiest Season.“ Since winning Season 5 of RuPaul's Drag Race, Jinkx Monsoon has travelled the world performing her original cabaret shows with her music partner, Major Scales. The duo are best known for their highly acclaimed show The Vaudevillians, which enjoyed multiple extensions Off-Broadway and toured to many international festivals. With original music by Major Scales, Jinkx has released two albums: The Inevitable Album and The Ginger Snapped (available on Apple Music [iTunes] and Spotify). While live performing is her passion, Jinkx is no stranger to film and TV work. Besides her stint in reality TV, she has appeared on the CBS cop drama Blue Bloods, the Netflix original AJ and the Queen, and has voiced characters for such animated shows as Steven Universe, Mighty Magiswords, Bravest Warriors, as well as a few surprises that are yet to come! Jinkx has been the subject of two documentaries: Drag Becomes Him, and The Queens. She is an award winning stage actress, having won the Gregory Award for her portrayal of Hedwig in Hedwig and the Angry Inch, and most recently, The MAC Award for her show The Ginger Snapped co-written with Major Scales. (Gosh, his name pops up a lot in her bio). You can watch her webshow Cool Mom with comedy partner Nick Sahoyah on the streaming app WOW Presents Plus. Jinkx is extremely proud of her partnership with BenDeLaCreme, having co-written and co-starred in both To Jesus, Thanks for Everything! -Jinkx and DeLa and All I Want for Christmas is Attention. Taking their collaboration to the medium of film is a dream come true for this internationally tolerated actress and chanteuse with The Jinkx & DeLa Holiday Special, featured on Hulu in 2020. Jinkx Monsoon also made a cameo appearance along with BenDeLaCreme in Hulu's biggest film debut to date, The Happiest Season.“
Read More
*Service and handling fees are added to the price of each ticket.