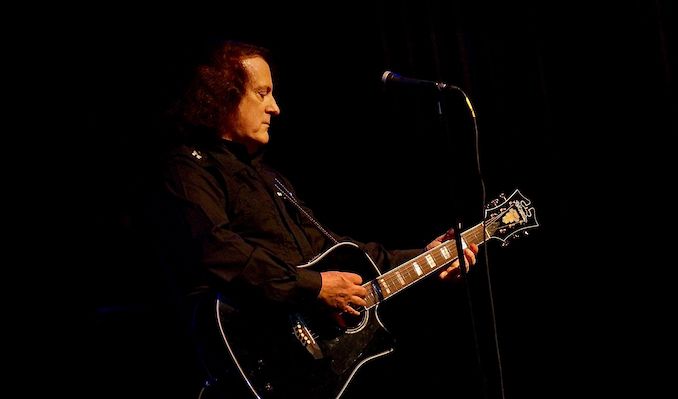 The music of Tommy James is played continuously, everyday, in every country in the world, and has been for more than a generation. His songs are so ingrained in modern culture, it's difficult to go for more than a day or so without hearing one of them on the radio, TV, or a film soundtrack. To date, Tommy's sold over 100 million records and has been awarded 23 gold singles, and nine gold and platinum albums.

He was born Thomas Jackson on April 29, 1947 in Dayton, Ohio, his family finally settled in Niles, Michigan, which he still regards as his hometown, where he made his first stage appearance as a child model at age four. In 1959, at the age of 12, he formed his first rock band, "The Tornadoes", and began playing local gigs around the area, developing a sizeable following along the way.

In 1964 a local DJ asked Tommy and the group to sign with his new regional label, "Snap Records". Among the four sides they recorded was an obscure song written by Jeff Barry and Ellie Greenwich called "HANKY PANKY". The group changed their name to "The Shondells" and released it as a single. It was an instant local hit but didn't break nationally and was soon forgotten.

Amazingly, two years later, the record was found in a record bin by a Pittsburgh nightclub DJ who played it at his weekend dances. The response was so overwhelming that the local radio stations started spinning it and an enterprising record distributor bootlegged it, selling 80000 copies in ten days. By May of 1966, HANKY PANKY was the number one record in Pittsburgh and Tommy James was a sensation. Tommy was quickly tracked down and asked to come to Pittsburgh. Unable to put the original group back together, he went alone and hired a local band to be The Shondells. Two weeks later the new group signed a record deal with Roulette Records in New York and HANKY PANKY became the biggest hit of the summer of '66. Thus, began one of the longest strings of non-stop hits in recording industry history.

HANKY PANKY was quickly followed by two more million selling singles, SAY I AM (WHAT I AM) and IT'S ONLY LOVE and the Hanky Panky album , which went gold just four weeks after its release in July, 1966.

Tommy then added producers Bo Gentry and Ritchie Cordell to the team who, over the next two years, produced seven more back-to-back gold singles: I THINK WE'RE ALONE NOW, MIRAGE, I LIKE THE WAY, GETTIN' TOGETHER, OUT OF THE BLUE, GET OUT NOW, and the party rock rave-up, MONY MONY. The Gentry/Cordell/James team also produced three platinum albums: I THINK WE'RE ALONE NOW, SOMETHING SPECIAL, and MONY MONY.

In 1968, Tommy James and The Shondells became one of the first acts to experiment with Music Videos of their hits, creating a mini-film around "Mony Mony," thirteen years before MTV hit the airwaves.

After spending three months on the road with Vice President Hubert Humphrey's Presidential campaign, TJ and company took over the creative reins of their career by writing and producing their next record, the groundbreaking CRIMSON AND CLOVER album. Released in early 1969, it went multi-platinum, and spawned three more monster hits for the group: DO SOMETHING TO ME, CRIMSON AND CLOVER, and CRYSTAL BLUE PERSUASION. A fourth song on the LP, SUGAR ON SUNDAY, rose high on the charts in a cover version by The Clique.

The CRIMSON AND CLOVER album was followed by CELLOPHANE SYMPHONY, which featured the newly developed Moog Synthesizer, and included yet another Top Ten smash, SWEET CHERRY WINE. Their second volume of greatest hits, THE BEST OF TOMMY JAMES AND THE SHONDELLS â€" featuring BALL OF FIRE â€" also appeared that year, and to-date has sold over 10 million copies.

In 1970 the group released another million selling LP, TRAVELIN'. which contained the gold singles, SHE and GOTTA GET BACK TO YOU. Thought by many to be the band's best work, this innovative concept album was the last LP Tommy made with The Shondells. After four hectic years, both he and the band decided they needed some time off.

When he returned, Tommy did so as a solo act, writing and producing the million selling single TIGHTER, TIGHTER for the group Alive 'N Kickin". Over the next four years Tommy scored an additional twelve chart singles including: COME TO ME, BALL AND CHAIN, I'M COMIN' HOME and DRAGGIN' THE LINE. During that time he also produced three Top 40 albums â€" TOMMY JAMES, CHRISTIAN OF THE WORLD, and MY HEAD, MY BED AND MY RED GUITAR â€" the latter recorded in Nashville with an all-star cast that featured ace guitarist Pete Drake and Elvis Presley sidemen, Scotty Moore and DJ Fontana.

In 1974 Tommy left Roulette Records and over the next three years, recorded the IN TOUCH and MIDNIGHT RIDER albums for San Francisco-based Fantasy Records. Returning to the east coast in 1980, he signed with Millennium Records and racked up three more chart singles, including the million selling AC chart-topper, THREE TIMES IN LOVE.

By the mid-80's, Tommy's songs, now considered classics, were being covered all over the world by everyone from punk rockers (Joan Jett and the Blackhearts) to symphony orchestras (The Boston Pops) to country icons (Dolly Parton). At one point in 1987, Tiffany and Billy Idol, with their versions of I THINK WE'RE ALONE NOW and MONY MONY, fought it out for the top spot on the charts for a solid month, each eventually going number one. It was the first time in music history that two cover versions of songs by the same artist went number one back-to-back. As of 2009, over 300 artists have recorded their own rendition of a Tommy tune and there's no end in sight.

Over the past 20 years, Tommy's music has graced countless movies, television shows, and advertisements. Notable appearances on the big screen include spots in Forrest Gump, Oliver Stone's Heaven And Earth, Cape Fear, Don't Tell Mom The Babysitter's Dead, We Are Marshall, Zodiac, and the 1999 summer blockbuster Austin Powers: The Spy Who Shagged Me, for which REM reprised DRAGGIN' THE LINE.

Small screen fans also caught DRAGGIN' THE LINE in My Name Is Earl, MONY MONY on Boston Legal, and SWEET CHERRY WINE in Life On Mars. TV viewers and Tommy fans got a further treat when Kohl's chose TIGHTER, TIGHTER to accompany a national ad campaign for jeans.

In the 1990's, Tommy formed an Indie Label called AURA RECORDS and went on to score three Top Five AC hits on the Aura label from his 2006 studio album HOLD THE FIRE .

In 2008, Tommy marked his fifth decade as a recording artist with the release of the I LOVE CHRISTMAS album, featuring three TJ originals. Along with the title track â€" a holiday favorite with radio programmers everywhere since its 2005 release â€" another instant classic, IT'S CHRISTMAS AGAIN, reunited Tommy with original Shondells (Mike Vale, Eddie Gray, and Ronnie Rossman) on vocals.

Tommy also put out a career-spanning retrospective for his fans, 40 Years: The Complete Singles Collection (1966-2006), which included all 48 of his singles, among them a pre-Shondells recording from 1962.

And, to top it all off, the leadoff track on Tom Jones' latest CD was I'M ALIVE and Prince reworked CRIMSON AND CLOVER for his upcoming LotusFlow3r album.

Today, Tommy is busier than ever, performing to sell out crowds across the country as well as working on a myriad of new projects. This year publishing giant Simon & Schuster will publish his autobiography â€" Me, The Mob and The Music â€" and Hollywood will begin work on a major motion picture based on his life.

Official WebsiteMySpaceAmazon
*Service and handling fees are added to the price of each ticket.